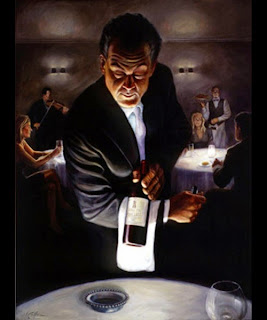 A famous Tombstone watering hole hires Larry Anosmia MS to increase sales and keep an eye on the Clanton gang. Doc Holliday takes a liking to the new sommelier in town, even switching from his shots of rotgut whiskey to the occasional glass of skin-contact Ribolla. Larry’s fallen in love with Miss Jancis, the town Madam, but she wants nothing to do with Larry, who wears an effeminate tastevin and brags about spitting.


Surprisingly, there hasn't been a successful TV show that featured a sommelier. That may be about to change with the new HBO series, "Larry Anosmia MS, Frontier Sommelier." I've summarized the first six exciting episodes over at Tim Atkin's world-famous award-winning site in my own inimitable award-winning way. "Frontier Sommelier" looks to be the hit show of the new television season! Do feel free to express your critical opinion of the new show over at Tim's, or, if you feel the need to blog surf, hang ten here with your reviews.

Is it possible that the Road Warrior award made you even a better writer? This might be the single most amusing piece you've ever done! Congrats - especially on Miss Doisy!! You've given us a true classic Ron!
George

Thanks Steve, and Thanks George,

I've been struggling a bit with the success I've had lately. The Roederer Award, which was very meaningful to me, and writing for the new Wine Advocate site once a month, which is cool, have made what was once just an idle hobby into something more like a job. And jobs are work, whereas writing comedy is, for me, play.

I've always tried to do different things here, vary the tone, vary the style, try out voices and premises as they strike me. This was a silly sort of piece, almost a New Yorker sort of "casual." It contrasts with the Trump posts, and the "Wine Critics in Hell" in a way I like.

I've told myself to ignore my success and continue to just screw around here. My success is, by any measure, rather modest. And I still have enormous room for improvement. Anyhow, thanks for the kind words.

It is often the pieces that you call "silly" or "fluff' (my word) that are the funniest because they are filled with gags--and we all laugh.

But, as usual, there are the complex constructions that really make the piece like "Jancis With Wolves" and "labeled as 1936 and it is only 1887" that come out of nowhere and are genuinely creative.

And, of course, I have missed Larry and am glad to see that he is alive and well.

Charlie,
Well, for me it's the difference between humor and satire. It can be a murky line between them, but this piece was humor, or humor adjacent. Humor is often silly, though still makes a point. Satire is rarely silly, but is instead often quite tasteless, harsh and risky. I love both, but they are very different to write, and very different to read.

I just liked the title "Jancis with Wolves" so I had to make up the plot. Maybe the hardest decision was to write the piece as a series of plot summaries, but they were almost like the sort of pitches I used to have to write when I worked as a comedy writer. Plot with a couple of jokes. Once I decided on it as the format, it was sort of fun to write.

Larry is an MS, and, thus, immortal.

I was going to blind-review it - but then I read it...
Lovely pairings (what to pair with different types of blood spatter?), and its good to see that Larry is still a HMW-hangaround.

I love Episode 5 the best. The Bloggers vs the Whore House, ROFLMAO. Except they do it for free. Thank you for such a good laugh!