How the Russians Are Secretly Destroying the Wine Business 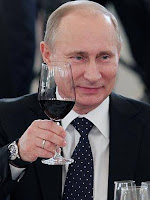 Solid evidence has been slow in coming, but there is little doubt that over the past decade the Russian government, under the direction of Vladimir Putin, has been tampering with the wine business. The tampering has taken many different forms, but it all seems aimed at destabilizing the credibility of the wine business itself—not such a difficult task given the unstable nature of its most famous figures. No one is quite certain what Putin’s motivation might be other than he’s just a meddling, power-hungry dictator, which makes it rather astonishing he failed his recent Master of Wine practical exam.

I'm sort of the Seymour Hersh of wine bloggers, if you don't consider research and credible evidence a must. And who does nowadays? I've published a blockbuster report over at Tim Atkin's amazing site detailing the Russian plot to destroy the wine business. It's both shocking and awing, and it's free as soon as you make the jump. As always, feel free to leave your witty remarks on Tim's site, or leave them here, along with a bit of Putin's traditional radiation poisoning.

Oh, dear. I think I'm one of the 3 women registered on WineBerserkers.

When you consider that winemaking dates back to 8000 BC in the Caucasus region – a period of pre-fermentation science when wine grapes began to ferment on their skins in their collection “bins” while awaiting transport to the winery for crushing – it’s not surprising that the so-called “Natural Wine Movement” has a Soviet (Russian) legacy.

Indeed, many of today’s “Natural Wines” come from Cricova outside of Moldova’s capital of Chisinau – home to Putin’s wine cellar:

For evidence of Russia’s longstanding interference in the California wine industry, one has to look no further than the colonization of the Russian River Valley and the influence of André Tchelistcheff.

Heroic post, Ron! "Many are toxic, or, even worse, txakolina.” Still laughing about that.

Hey Common Taters,
As an aside, it's amazing how people don't comment on blogs that much anymore, except the circle jerk sort of blogs. It bothered me for a bit, but now I'm sort of relieved. I used to spend more time responding to comments than writing the posts. Which, of course, was sadly obvious.

I had the idea for this piece a few days ago, and the more I thought about it, and began to lie about it, in the manner of our Prevaricator of the United States (POTUS), the more fun I was having. FAKE news is so much more fun to report. I even went to the extra trouble of using a click bait type headline, a la Blinky Gray or Wark. I went all out on misleading, and outright lies.

Damn, Bob, I went right by Tchelistcheff. Good call. An obvious early plant by the Soviets, and his acolytes are still making FAKE wines today.

The Russian presence in the Bay Area goes back to Fort Ross and the Russian-American company:

And continues to have an insidious influence on winemaking to this day:

(And to think that some folks believe I make up this conspiracy theory/hegemony shit. The Truth Is Out There . . .)

I believe we are beginning to see the connection here.
The Emperor of Wine and these crazy Russian hackers. What else could it be?

Thanks for that very interesting historical bit of fact Bob! :)