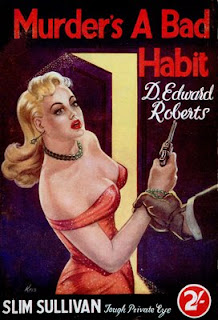 
People always ask me what it's like going from being a sommelier to being a private detective--public dick to private dick. It's like you hang up your overcoat and give up being an exhibitionist. You stop scaring young girls by whipping out your wine knowledge and hoping they'll gasp in admiration. And I never even bothered with an M.S., that just exacerbates the flashing. When you think about it, an M.S. credential and a penis have a lot in common. With either one you take every chance you get to show it to people. It serves as proof you are what you say you are--a man or a wine expert. At the least provocation you whip it out and wave it around for anyone to see. And they react, they've heard about the M.S. exam, they look at what you're displaying to them and they instantly understand it's hard. And, gosh, not everyone has one, so it must be some sort of achievement. Isn't it?

I was lucky. I got out of the sommelier business in the nick of time. Before the M.S. goons and grifters muscled their way into the wine business, hired for the meaningless letters after their names by wine-clueless restaurant owners and delusional chefs (OK, "delusional chefs" is redundant, but I'm making a point here). Where once it took years and years of experience to qualify as wine knowledgeable, now it just took serious memorization, a checkbook, and putting all the right things on the tip of your tongue, many of them attached to the examiners. I've got nothing against the freaks and appellation-flashers who want the letters after their names, the letters that strike fear in the hearts of the wine ignorant everywhere, they go into it with high hopes and dreams of prestige borrowed from hundreds of years of wine snobbery. Only to find out that the magic letters come with a price. Lorna had paid the price, her neck broken like the screwtop on a cheap bottle of Australian shiraz you opened because you like the taste of manipulated wine, it reminds you of your life, the way you try to make it taste good despite the lousy ingredients. It was starting to feel like the M.S. dons were beginning to get nervous for some reason. The question was why. And maybe Jessica Jokes was thinking the same thing and that was why she was going to take the M.S. exam. Put her own life at risk. Maybe I'd underestimated her. Maybe I was still in love with her. No, I'd given up women for something better. Lubricants.


I had put all of that wine business buffonery and pretense behind me when I became a private dick; it was just a distant scene I occasionally glimpsed in my rearview mirror. And speaking of rearview, how did Veronica fit into all of this? She'd need a wide screen, that's for sure, she had a rearview only Cinemascope could do justice to. But she'd showed me a bit more wine knowledge than I'd expected. Had she set me up with Lorna, or had her friends, or was she just another dreamer longing to be a sommelier? And how was I going to get her into the M.S. exams without Jessica knowing I was involved?


I was thinking about Veronica when I felt a buzzing in my pants. This was odd since I don't own a cellphone. Odd, but pleasant. I'd owned a really cheap device for a while, a kind of Blackberry knockoff. A Dingleberry, but I'd gotten rid of it. It hardly ever dingled.

"Hey, Hoseapoppin', come with me." It was Chief Jokes yelling at me across the square. "I just got a call. Another M.S. candidate just turned up dead. Drowned in the tub. Let's hope it was an accident." 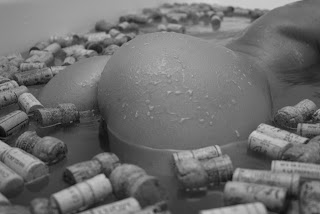 She, whoever she was, was still in the tub, face down, her gorgeous butt looking eerily like Harvey Steiman without a bow tie. But this was no accident. In the tub with her, bobbing around like pieces of her shattered dreams, were corks. Hundred of corks. Someone had made cork soup, with sommelier stock.
Posted by Ron Washam, HMW at 8:00 AM

A fellow blogger with an eye for what suits the ol' HoseMaster forwarded the photo to me, and when I saw it I knew it was a crime scene photo from "The M.S. Conspiracy." I suspect that blogger may not want to be identified, but I owe him thanks.

I'm thinking about allowing Guest Bloggers to write a chapter of my ongoing shaggy sommelier story. Any volunteers? Just thinking about it... Hey, it makes my work load lighter.

hmmmm how come these dead chicks are always found naked? Remind me never to get naked around you!

I thought the same as Mr. Neverking! What a great photo, so perfect for your serial story. The imagination runs wild with where all the corks came from and why....

Anybody ever see the movie, The Adventures of Priscilla, Queen of The Desert?

I hope the corks did not have the same provenance as all those ping pong balls.

You mean they make ping pong balls from oak bark? Who knew?

Oh, and you really shouldn't give me any ideas...

Yeah Charlie, don't give that twisted mind any ideas! Oh and on guest writing, not a chance in hell My Love, this is all you.

Indeed, Sam is right: No guest writer can hold a candle...or, er, cork (insert rimshot wmv file here)...to your writing abilities for this fine tome of wine literature. ...Except...perhaps... well, Mr. Chandler and his partners in crime...writing...are all dead. That leaves you, Ron!