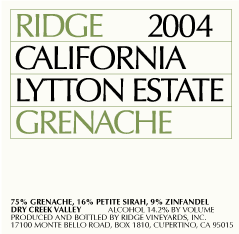 I've been a member of Ridge's Advance Tasting Program (ATP) since Harvey Steiman was in diapers. So, like, five years. I am rarely disappointed by the ATP offerings, but I wasn't particularly thrilled with the 2004 Grenache from Lytton Estate. Maybe I just don't get what Ridge is trying to achieve with this wine. Hey, far be it from me to question anything that Paul Draper, Ridge's legendary winemaster, puts into a bottle. For my money, Mr. Draper is one of California's winemaking geniuses, and the rare one that isn't self-proclaimed. I'm not qualified to carry his spit bucket. But the '04 Grenache, just released, struck me as clumsy and awkwardly tannic. I've always found the great Grenaches in the world to be graceful and luscious, but this wine is about as graceful as J. Edgar Hoover in high heels. There's some dark fruit on the nose, heavyhanded American oak as well, with a brief burst of blueberries on the palate, which fade quickly into an overly tannic finish. I'm being a bit hard on this wine (hell, it was a bit hard on me) because I've come to expect much more from Ridge. And, like Lou Dobbs' bad toupee, I don't see it getting any better with time.


Disclaimer: No animals were killed or injured in the writing of this review, except for the cow who gave its life so that I could narf a steak with the Grenache. Thanks, Bessie!

Email ThisBlogThis!Share to TwitterShare to FacebookShare to Pinterest
Labels: What's the HoseMaster Drinking?

Interesting to hear that you didn't care for the Grenache as it seems like the hype for Ridge has been building among average wine drinkers lately. ATP with Ridge must be an enjoyable experience!

I wasn't clear about ATP; it's Ridge's "wine club," basically, and members are sent wines that are made just for their members, mostly Zin, but occasionally Grenache, Syrah and Carignane. I highly recommend it. I just didn't care for the '04 Grenache, which, in my 25 years or so of being a member of ATP, is a very rare experience.

Guess everyone lets a stinker go from time to time. I tasted through some of the 07 Zins a couple weeks ago, found the wood too aggressive for my palate, (but what do I know, don't much care for Zin in the first place) but after tasting through the 06's I was back on the Ridge band wagon...really well made wines, great texture and balance, and that is coming from a French wine lover. Too bad about the Grenache...I do loves me some Grenache, oh and I kinda dig you too there HoseMaster.

I am not so sure we should be wringing our hands here. The number of terrific CA Grenaches over the years is not much than the Hosemaster's opinion of the 100-point scale--or something akin to zilch.

OK, so maybe that is a slight exaggeration, but so far, we have not done very well with the variety, and the search for a red southern Rhone blend in CA starts almost always with Syrah, which is not the dominant grape in the southern Rhone, because we do not have the Grenache with which to start it.

Charlie,
Sadly there are quite a few producers in the Southern Rhone that are increasing the amount of Syrah they put in their blends. I tasted a Cotes du Rhone a couple of weeks ago that you would swear wad from Australia...gack! More Syrah, deeper color, richness, more flash, makes for a more broad market appeal and sadly, can mean higher scores...

I would agree with your assessment of the Grenache situation in California, though I've had an occasional winner from folks like Saxum, Cedarville Vineyards, and, once upon a time, Beckmen. In a league with the best of Chateauneuf-du-Pape? Hardly. And Ridge has never been adept with the variety in my experience, though they are clearly one of the great California producers with a track record few can match.

Was that my hands wringing? Hell, can somebody get that?

It seems the Southern Rhone jumped on the same Syrah bandwagon a few years ago that California was riding, the bandwagon that believed Syrah was going to be the next consumer darling. Now that ocean of Syrah has to go somewhere, and it ends up darkening many Cotes-du-Rhone and Vacqueyras and Gigondas, especially the negociant stuff. Those wines don't speak to me either.

I kinda dig you too, My Samantha.

In fact, I adore you.